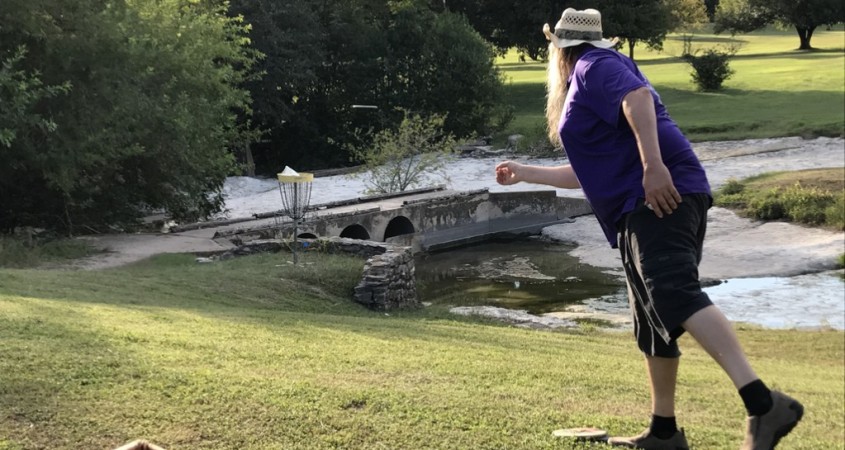 Texas is the number one destination for disc golf in the United States with more courses and events than any other state, according to the Professional Disc Golf Association. The sport is thriving in Austin in particular.

Disc golf is played similarly to regular golf, but instead of using clubs to whack a small ball into a hole yards away, players throw a frisbee into an elevated metal basket. Like regular golf, each hole and course has a certain par with the lowest score winning.

“It fits the Austin lifestyle – outdoors, having fun and a bit of fitness with a laidback hippie element,” says Gordon Kelley, Waterloo Disc Golf Club president. “Most people around Austin have heard of it or know of it even if they haven’t played it – maybe they’ve seen it or know someone who plays.”

Due to the sport’s versatility, it isn’t limited to particular topography – unlike others that may need stadiums or massive fields to be played – so various 9- and 18-hole courses dot the city, whether they’re near a church or school or played with a drink in hand at a brewery or winery. There’s also 30-40 other courses less than an hour’s drive in nearby city suburbs including Kyle, Round Rock and Georgetown. Disc Nation, one of the largest and most recognized retailers in disc golf, has its superstore located in Austin as well.

The exact origins of the sport are unclear, with isolated occurrences of disc golf being played at various locations, but the modern-day sport traces its roots to the 1960s and ‘70s. Ed Headrick is considered to be the “Father of Disc Golf” because he invented the modern-day frisbee and the first disc golf basket (Disc Hole Pole), designed and installed the first disc golf course and founded many of the sport’s governing bodies.

Approximately 8-12 million people played disc golf with an estimated two million playing regularly in 2017, according to the PDGA.

Austin resident Kevin Fan, 31, says he plays disc golf because it’s an inexpensive and fun way to hang out with his friends.

“I think disc golf fits into the Austin lifestyle because it’s a pretty chill activity where you can socialize with friends and enjoy the outdoors,” he says.

Kelley said the sport’s accessibility, versatility, low costs and ease of gameplay make it available to the masses. The annual Waterloo Disc Golf Classic, now in its 41st year, typically sells out within a week or two; the 2018 event scheduled for October 20-21 sold out in 11 days.

“It’s not a bunch of teenagers and college kids throwing frisbees in the park,” he says. “It’s a fairly diverse group. Disc golf has the ease and fun of throwing a frisbee, coupled with an actual sport and goal, so it has a broad appeal.”