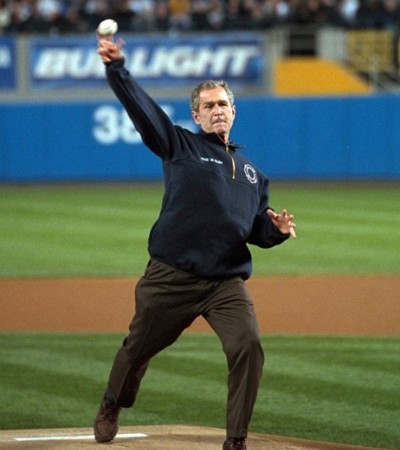 The chants of U-S-A! U-S-A! echoed through Yankee Stadium to a deafening tone.

I was in the stands for Game 3 of the 2001 World Series between the New York Yankees and Arizona Diamondbacks with my father, brother and friend.

My first World Series experience came on the heels of one of the greatest tragedies in United States history. The terrorist attacks of September 11, 2001, not only caused the country and world to pause, but its effects rippled throughout every aspect of life.

Sports, not surprisingly, were affected as well. Major League Baseball was postponed and the World Series was to be played deep into the fall — beginning on Oct. 27 and ending on Nov. 4.

Game 3 — the first at Yankee Stadium in the series — took place on Oct. 30; a mere seven weeks following the events of Sept. 11.

No one was scared that night. With chilling temperatures common to New York in late October, fans were kept warm with national pride. Touching tributes and moments accented the evening as the Yankees won 2-1 on a Scott Brosius RBI single in the sixth inning. President George W. Bush threw out the ceremonial first pitch and stars and stripes were scattered throughout the navy pinstripes in the crowd.

That’s the thing about sports. No matter what happens in this cruel, unforgiving world, sports are the ultimate uniting tool. Same is to be said following the horrific incidents in Paris on Friday evening.

The support for the victims of the latest terrorist attack has been world-wide. One World Trade Center in New York, the Sydney Opera House, the CN Tower in Toronto and many other landmarks proudly boasted the blue, white and red of the France flag.

The same support was shown across the sports world. The French National Anthem was sung prior to O Canada and The Star Spangled Banner before the Ottawa Senators hosted the New York Rangers on Saturday afternoon. The Army football team ran onto the field carrying the French flag. New Orleans Pelicans center Alexis Ajinça penned “#PrayForParis” on his sneakers ahead of Friday’s game at the Toronto Raptors.

The world may be divided based on countless issues — race, religion, women’s rights — but one thing is for sure: no matter what team(s) you root for, what you believe in, what color your skin is, we are all together because of sports.