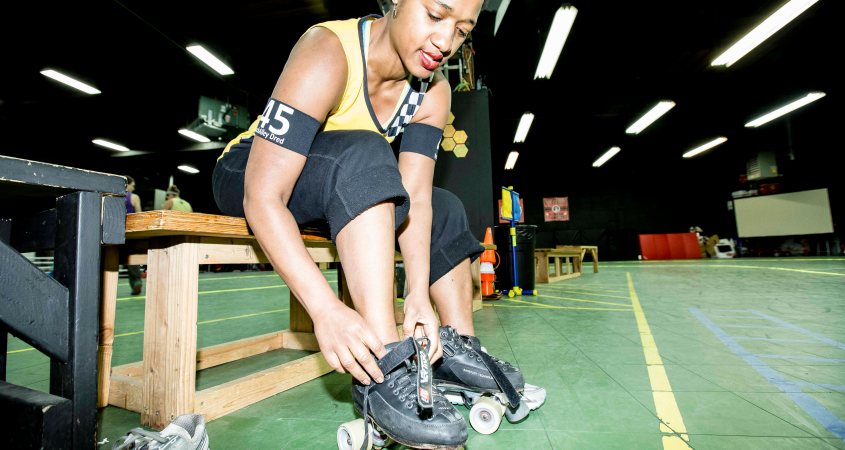 Karen Williams wears many hats. She is a cultural anthropologist, undergraduate teacher at Queens College and an instructor at New York Insight Meditation Center. Williams, though, also wears a helmet. And knee pads. And wrist guards. And roller skates.

“Roller derby is a great opportunity to grow and see things you didn’t know you’d love to do,” Williams said. “There are times I amaze myself when I do a certain turn or move and I have no idea where it came from. You just dig in and it’s great to be like ‘yes’ and it’s encouraging and empowering. I really like it.”

Williams first heard of roller derby when she was in Columbia, Mo., doing research for graduate school. She had no idea what the sport entailed.

“I wasn’t really into hitting people or roller skating,” she said.

But she gave it a shot anyway. She fell in love with the sport following an eight-week introductory program. When she returned to New York City to finish her studies, she looked up Gotham Girls and tried out. Instead of renting skates like she did in Missouri, Williams needed her own pair. She went to Five Stride Skate Shop in Brooklyn, where a woman named Bonnie Thunders—who has been dubbed the LeBron James of roller derby by ESPN—sold her a pair of skates.

“I had to look her up before I realized how important she was,” Williams said.

Now she’s more than familiar with Thunders and roller derby. Williams, who goes by “BackAlley Dred”, is on skates whenever she has the time. Outside of her time in the classroom, Williams has a pretty flexible schedule, which allows her to complete her work and research. In fact, when she was in Denver for a family reunion, she ran off one night with roller skates in tow, to practice with the local team.

“If you say ‘roller derby’ people think tough, aggressive, elbowing and that isn’t necessarily a sport, per say,” Williams said. “There’s a lot of time and dedication that goes into playing. There’s skill and technique involved. My partner can’t really skate and he just started doing the rec league. Every week he comes home and goes, ‘I have newfound respect for you,’ and I’m like ‘Now you know what I’m talking about.’”

Culture Trip: What was your biggest adjustment when you began roller derby?

Karen Williams: It wasn’t so much the skating, it was more of the derby stance and hitting, and getting used to being hit that hard. It took a little while for me to get the mechanics down. I don’t know if it’s second nature but it’s a lot easier now.

CT: How did you come up with your nickname?

KW: I went through a couple of different names. There is this online derby name generator, so I put my name in there and I didn’t like it. Then I put in my mom’s name (Doris Jean Williams) and “BackAlley” came up. I was thinking “Bootealicious” because I like tea. I liked “BackAlley,” but was like “BackAlley” what? I started thinking about where I was (in Missouri) and realized that Dred Scott was a slave who sued for his freedom. At the time I had dreadlocks, too. I came up with “BackAlley Dred,” like Dred Scott but it’s also like dreadlocks and also dreading someone in the back alley—multiple layers to it. They call me “Dred” for short.

CT: How have you seen roller derby grow since you got involved?

KW: One of the big things is junior derby. They’re starting so young and that’s expanding the sport generationally. There are also more cities and people getting involved in roller derby. When you travel you can do just about anywhere. There are a lot of places you wouldn’t think they’d have a team or league and they do, like in Egypt.