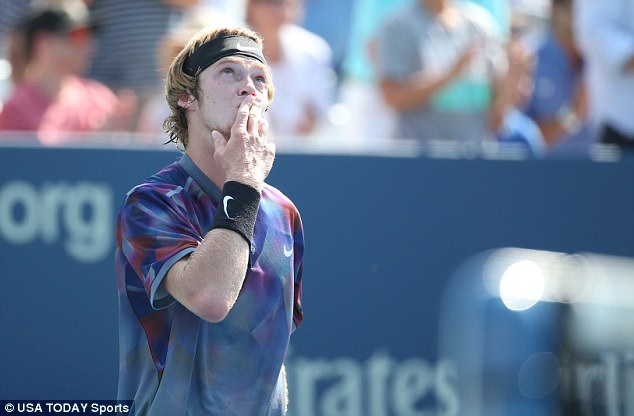 Andrey Rublev rarely looked like a teenager during his exciting run to the 2017 U.S. Open quarterfinals over the past two weeks at the Billie Jean King National Tennis Center in Flushing Meadows, N.Y.

The 19-year-old Russian dispatched a pair of top-10 seeds (No. 7 Grigor Dimitrov and No. 9 David Goffin) before losing 6-1, 6-2, 6-2 to No. 1 seed and ATP world No. 1 Rafael Nadal in the quarterfinals Wednesday. Rublev, who hadn’t made it past the second round of any Grand Slam event and is the youngest U.S. Open quarterfinalist since Andy Roddick (2001), is using his success at the U.S. Open as a learning experience.

“I mean, it’s great experience to play in the quarterfinal against world No. 1 Rafael Nadal,” Rublev said. “I’m really happy. I will try now to practice harder to improve everything for the next time if we play each other to try to compete better. … This match told me how far I am and how much I need to improve, so now is time to try to be better and become stronger.”

Rublev, who turned pro in 2014, is No. 53 in the ATP world rankings as a result of his U.S. Open performance. He is the youngest player and only teenager in the ATP top 60. Rublev, who won the 2014 French Open boys’ title, won his first tour-level title in Umag, Croatia, earlier this year after entering into the main draw as a lucky loser.

It’s no surprise based on his recent success that Nadal sees Rublev as one of the rising stars in international tennis.

“It’s difficult, 19 years old, to do what he did,” Nadal said. “He won against great players, competing very well. For the last six months, I think he improved a lot. That’s so important, no? … The thing is, even if you are young and you are having success, you know that you have to keep doing things that make you a better player. I think he’s doing that, and that’s the most important thing in our sport.”

Rublev’s athleticism, sporting abilities, and poise should come as no surprise. His mother, Marina Marenko, is a tennis coach, and his father, Andrey Rublev Sr., is a former professional boxer. It’s why Rublev wasn’t fazed when he faced the world No. 1 on the famed Arthur Ashe Stadium, which is celebrating its 20th anniversary at the grounds.

Rublev is trying to make big matches, high-pressure situations and raucous crowds like that commonplace in his career.

“I feel when I walk on the court, I feel that I don’t want to leave the court, you know,” he said. “These are great emotions. I would like to play on these courts more and more. I will try to do my best.”