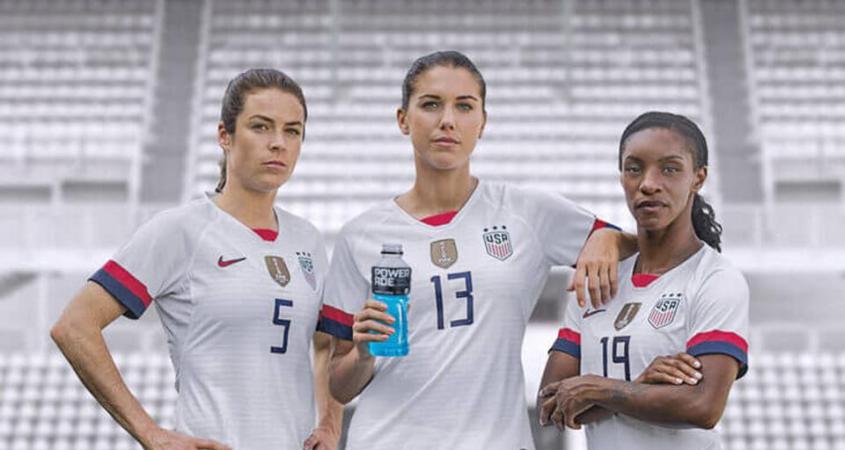 While soccer has seen visible growth in both interest and participation in the United States, unfortunately not everyone attracted to the world’s most-popular sport has a platform to play and enjoy it.

Powerade, the official sports drink of the U.S. Women’s National Team, is partnering with the United States Soccer Foundation to change that.

To kick off its “Power Has No Gender” campaign, Powerade, in conjunction with the U.S. Soccer Foundation, is creating three mini-pitches in underserved communities in New York City, Los Angeles and Atlanta in 2019 to serve as safe spaces for girls to play, while honoring hometown heroes and USWNT stars Alex Morgan, Crystal Dunn and Kelley O’Hara.

“The game has grown phenomenally since the U.S. hosted the World Cup in 1994,” U.S. Soccer Foundation CEO and president Ed Foster-Simeon said. “When you have a major event like the Women’s World Cup, obviously interest is at its peak and there will be even more appetite to participate and play. When girls see women playing and competing at a high level like that, that’s not only inspiring to girls but also boys.

“This is an incredibly important opportunity to take advantage of the attention given to the sport during the Women’s World Cup.”

“Power Has No Gender” is the first chapter of Powerade’s “Power Has No Limit” campaign, dedicated to discussing the challenges athletes unfortunately face based on race, age, ability, access and identity.

The campaign comes at a pivotal time in sports—and society, for that matter—as more attention has been brought to the disparity between men and women on the field and in the office, whether it’s regarding salary, opportunities or resources. Twenty-eight members of the USWNT filed a gender discrimination lawsuit against the U.S. Soccer Federation (USSF) on March 8, claiming years of “institutionalized gender discrimination.”

“It’s really important to us because we are very aware of the gap and opportunities for women and girls in sports in general,” Powerade senior brand manager Jasmine Lipford said. “We’re hoping to do our part that as many young girls and women we can reach are impacted and can reap the benefits of playing sports.”

The U.S. Soccer Foundation plans to transform 1,000 safe spaces to play across the United States by 2026 as part of the organization’s initiative to provide children with the opportunity to not only play the sport they love, but take the values and experiences from the field into the rest of their lives.

According to the foundation, which has built nearly 300 mini-pitches, 97% of communities that have had a mini-pitch installed have seen an increase in activity among its residents. On average, each mini-pitch is programmed for five hours per day, engaging more than 350 children regularly.

“We know children will be watching the Women’s World Cup and these athletes and be inspired by that,” Foster-Simeon said. “A lot of times there’s a knee-jerk reaction that we say kids don’t go outside and play anymore, but in a lot of neighborhoods there isn’t a safe space to do so.

“It says a lot that Powerade has stepped up and made this kind of investment that will make a real and measurable difference in lives across this country. We’re thrilled about that and the belief in our game as a vehicle to build healthy communities across the U.S.”