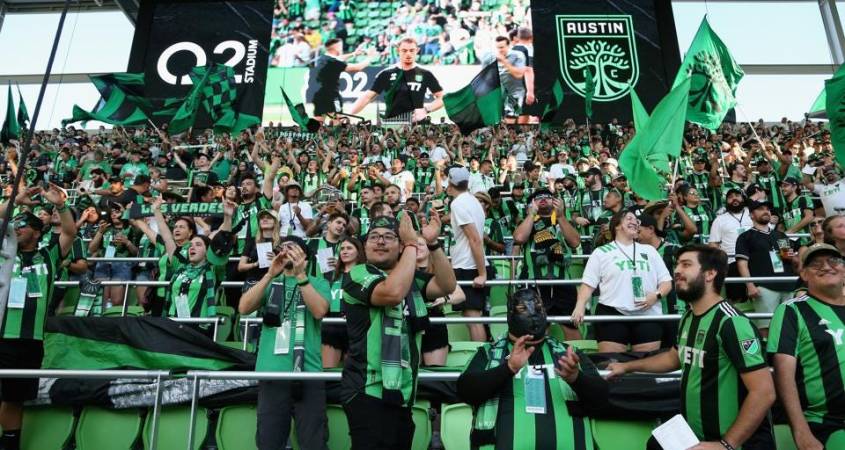 Already covered by an abundance of luscious tree canopy, the amount of green throughout Austin, Texas, grew exponentially ahead of the Austin FC inaugural home opener on June 19.

An Austin FC flag proudly flew outside The Bon Aire, in-game food and drink specials were promoted at Cover 2, and the club’s verde-and-black home kit was donned by countless runners up and down the Colorado River ahead of the evening’s match.

The 10th-most-populous city in the United States had been waiting a long time for its first professional sports franchise. You can say Austinites had been green with envy as new Major League Soccer franchises popped up in Cincinnati, Miami and Nashville.

“This is meaningful for a community that has so much pent up demand for major-league sports,” Austin FC president Andy Loughnane said. “To be able to build a world-class stadium and introduce the city’s first-ever major-league team, I think for anybody who’s been part of this project—whether you’re an early adopting supporter of the club or you’re a staff member—this has all been an experience of a lifetime.

Austin FC, which made its MLS debut on April 17, played its first eight matches on the road before returning to the Texas capital to play the San Jose Earthquakes in front of a sell-out crowd of 20,738 at the quintessentially Austin Q2 Stadium, a $260 million privately financed venture.

Prior to kickoff, Matthew McConaughey, Austin FC minority owner and Minister of Culture, strolled onto the field wearing an all-green suit with a drum in tow to further rile up the supporters chanting “Listos! Verde!” that reverberated off the metal roof.

While the match ended in a scoreless draw, it was still a major milestone not only for the club, but for soccer in the city where talk of “football” traditionally meant the Texas Longhorns or the Dallas Cowboys to the north and Houston Texans to the east.

“I think the fans, the community, the energy, the noise inside the stadium was impressive,” Austin FC head coach Josh Wolff said. “The [opposing] players and the staff were extremely complementary of the whole project that we have here. Certainly the way that we play but also the way that the game has been presented here, the support that we have.

While Loughnane and company are in charge of growing Austin FC’s brand and presence around the city, country and world, another priority is expanding soccer culture in the state capital; Austin FC is working with its brands and partners including Captain Morgan, Yeti, Q2 and Lexus to do just that.

“It’s not only about the big guys at the club, it’s about really getting this city on the map in terms of soccer, which is such a big opportunity for a city such as this,” said Sam Salameh, vice-president of Captain Morgan North America. “Soccer in this country is growing really fast. There’s a lot of people that dabble occasionally with the sport and want to get more into it, and we want to be that bridge and allow people to really build on their soccer love and passion for the game.”

A study commissioned by the city in 2018 estimated that Q2 Stadium will bring in over $25 million of economic activity annually through food and drink sales and hotel stays.

The interest is certainly there locally, rising to a fever pitch at kickoff on Saturday evening. There is currently a waitlist to be part of The Oak Collective, Austin FC’s season-ticket membership.

Loughnane said there is an opportunity to expand Q2 Stadium’s attendance by 1,500 seats, and that ownership “will take a serious look at that probably no sooner than the 2023 season.” The potential offseason expansion would take approximately four months to complete.

“Seeing Austin FC take the field on Saturday night was the culmination of many years of work by literally a cast of tens of thousands of people who came together in a way this community has never come together to be able to form the project of a lifetime,” Loughnane said. “This is a remarkable accomplishment in any city, but in Austin, Texas, the city that had stood as the largest city in North America without a major-league team, this is a milestone moment in a city whose trajectory is on the rise and a sport that’s on the rise.”