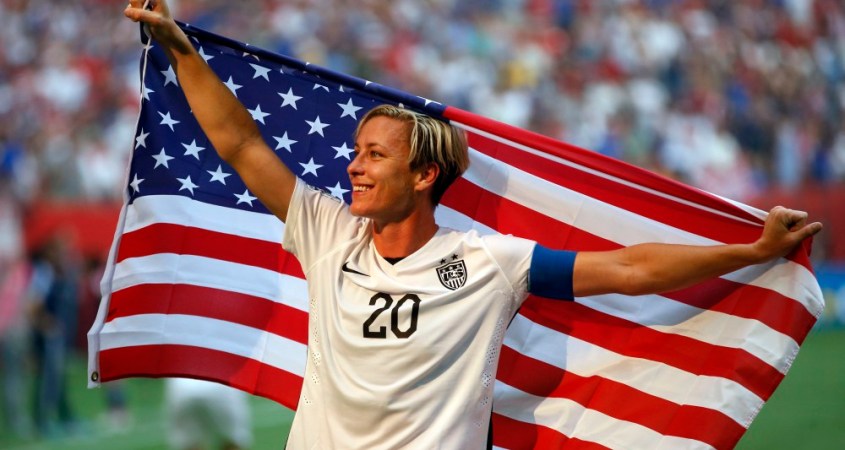 Mix Diskerud was on Cloud 9 when he signed with New York City FC on Jan. 13.

“Obviously I’m an American and now I have a chance to live in the States and I haven’t had that chance yet,” he later told me leading up to his debut season in the country. “That’s something I’ve been looking forward to.”

The midfielder was born in Oslo, Norway, to an American mother and Norwegian father. Mix played his entire professional soccer career in Norway until signing with New York City FC ahead of their inaugural season in Major League Soccer.

“I would definitely fire Jurgen [Klinsmann]. Sorry Sunil [Gulati], sorry, U.S. soccer, but I don’t think Jurgen and this litmus test on him has worked,” Wambach said on a Bill Simmons podcast. “He hasn’t really focused, I feel, enough attention on the youth programs. Although he says he has, I don’t think that he has. The way that he has brought in a bunch of these foreign guys is not something I believe in wholeheartedly. I don’t believe in it. I don’t believe in it in my heart.”

Mix, who was ignorantly lumped into the category of “foreign guys” wasn’t too pleased a fellow American was attacking him.

He responded to Wambach’s statement with one of his own.

Wow Abby, I guess there are pros and cons in limiting the base for selection. You have just singled out a few of us. But why? Why are we your single oddballs? Think about who you try to disenfranchise. Because if you see us as the group to disenfranchise, then at least let it be known who we are. Stats and history will show – “our group” has more than others produced volunteer and defending soldiers for what, by us, is willingly chosen and gathered to be worth protecting: Your nation. Wish you would accept it as ours too. I know we’re not quite equal. From “your group of people” the country’s Commander in Chief need to be selected. However, other than that – you and I share something not unique, but constitutionally earned, a birthright to defend this nation as an American. Wherever we go. Led by whoever has earned, by democratic process, his/her right to lead, on or off the field, in peace, in war, in practice, or in any other kind of pursuit of your happiness. Enjoy your retirement. But stay active. We all need you. Oddballs or not. Mix

Passionate words about the United States from some foreign guy, eh?

Mix is part of a group of dual-national players currently donning the Red, White and Blue.

Jermaine Jones, Fabian Johnson, John Brooks, Timmy Chandler and Julian Green are German-Americans; the first four were born in Germany to American military men who were stationed there. Green was born in Tampa, Fla. Aron Johannsson was born to Icelandic parents in Alabama.

Many other players on the USMNT have Central and South American roots as well.

Yet, for some reason, they’re deemed “foreign guys” by one U.S. Soccer’s most famous and successful players.

Wambach’s comments make it sound like the German-born Klinsmann, who resides in Southern California, is caravaning around the world scooping up anyone with the smallest tie to this country.

Players can’t pick and choose what country they play for. There is a detailed rhyme and reason of qualifications.

According to FIFA Statues (Article 5, Section 1): “Any person holding a permanent nationality that is not dependent on residence in a certain Country is eligible to play for the representative teams of the Association of that Country.

Surprisingly (read sarcastically), this isn’t the first instance of players born in other countries playing for (gasp) another nation.

Chelsea forward Diego Costa was born in Lagarto, Brazil. He played for Brazil and later gained Spanish citizenship in 2013. He now plays for Spain. Is Costa just some “foreign guy” brought in by coach Vicente del Bosque to help win? Nope. He’s a Spanish citizen.

Lukas Podolski, a German soccer player, was born in Gliwice, Poland. Miroslav Klose, who was born in Opole, Poland, holds the record for most  career goals scored in the FIFA World Cup; doing so for Germany, NOT Poland.

Players like Adnan Januzaj have a number of countries — based on FIFA-sanctioned qualifications, of course — to choose from to represent. Januzaj was eligible to represent Belgium (his country of birth), Albania (heritage), Turkey (his mother’s family was deported there) and even Kosovo (which doesn’t have a FIFA-affiliated senior team). Januzaj plays for Belgium.

The United States has been referred to as a “melting pot” or “salad bowl” highlighting the country’s diversity of races, ethnic groups and religions. People from across the world risk their lives to come here in order to have a shot at the American dream and live a better life.

We have members of the military stationed all across the globe fighting for our freedom. They’re raising families in these countries while risking their lives. Are their children considered American? Yes.

So for Abby Wambach, someone who has proudly represented her country on the world’s greatest stages, to criticize the heritage and nationalism of her fellow American soccer players is plain ignorant and stupid.

Be proud that these men are trying to emulate the success you and the women’s team have achieved. It’s not about men vs. women or half-American vs. 100 percent American. It’s about America. Period.