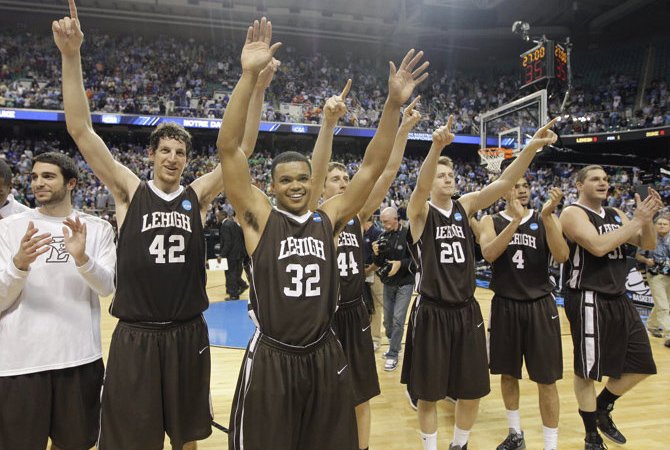 My fingers were trembling as I typed: “#Duke players sitting on bench with a look of disbelief. #Lehigh about to pull off one of best upsets in tournament history.”

My “#Lehigh” feed on TweetDeck was so relentless I had to remove it for the fear of my computer crashing during one of the biggest moments in March Madness history.

The Greensboro Coliseum was rocking on March 16, 2012.

Lehigh University, a small school from Bethlehem, Pa., (Where?!) that no one heard of, was on the verge of upsetting perennial powerhouse Duke University in the second round of the 2012 NCAA Tournament.

It truly was a David vs. Goliath story.

The Mountain Hawks, a No. 15 seed, were an automatic qualifier because they won the Patriot League Tournament. (Who plays in that conference?!) Duke, a No. 2 seed, was ranked eighth in the nation.

The Mountain Hawks, especially McCollum, became household names that night. The junior guard dropped a game-high 30 points on the Blue Devils in the 75-70 victory.

“They had the best player on the court tonight in McCollum,” Duke coach Mike Krzyzewski said after the loss. “… If we could have gotten him to foul out, that would have been the best strategy.”

High praise, certainly, from one of the game’s best.

It was a surreal moment for everyone involved, including a wide-eyed 25-year-old journalist experiencing March Madness firsthand for the first time in his career. You watch the upsets on TV, but they were different in person; you were part of them. You felt the utter despair of defeat. You felt the euphoria of victory.

“This is one of the best feelings in the world,” said McCollum, who went from being overlooked during the college recruiting process to an NBA Draft prospect — he currently plays for the Portland Trail Blazers.

Duke was a winner. The Blue Devils were used to being in the Final Four. They were used to cutting down nets after winning national championships.

This time they felt something different, something foreign.

That’s the thing about the NCAA Tournament — it’s so unpredictable. Prior to Lehigh beating Duke, No. 15 Norfolk State upset No. 2 Missouri that same day! On the first day of the 2016 tournament Thursday, No. 11 Wichita State, No. 12 Yale and No. 12 Arkansas-Little Rock all scored upsets over higher seeds.

Word of advice for those covering the tournament for the first time or the 10th — be prepared for anything. That includes packing enough clothes for a possible upset and a longer-than-expected stay at a regional site, say Greensboro, N.C., for example.

Even the best (I’m referring to myself here) make that mistake.

My stories from the 2012 NCAA Tournament:

Lehigh’s C.J. McCollum once thought about giving up basketball

Lehigh preparing for Xavier in third round of NCAA Tournament