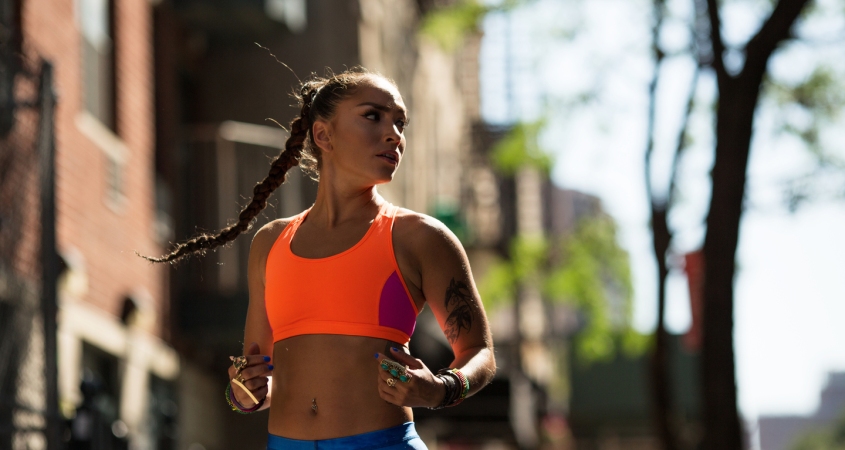 There was a time when Robin Arzon used to tell herself she wasn’t an athlete. Growing up in the suburbs of Philadelphia, Arzon would be on the sidelines as her cousins played soccer and ran track.

“My parents never put me in sports leagues growing up, so when I was exposed to sports in school I felt I couldn’t participate because I didn’t play since I was 5 like everyone else,” she said. “I would tell myself I wasn’t an athlete. That was my biggest inhibitor. It wasn’t until I was in my 20s I realized I could choose how I define myself and how the world sees me.”

Arzon ran her first mile when she was 23 years old while attending Villanova University School of Law. She saw a flyer for a 10k race in Philadelphia at a local bank and entered on a whim.

Running took a back seat to her job as a corporate litigator for Paul Hastings LLP when she moved to New York City. She yearned for the brief moments — usually an hour each day — she could escape her desk or the court room to run. She wasn’t tied to any shackles. She had no responsibilities. She was free.

Eventually those fleeting moments turned into an everlasting one. In 2012, Arzon quit her job after seven years to focus on a career in health and wellness. She joined the NYC Bridge Runners, a local running club, and hasn’t stopped moving since.

As she pens in her book Shut Up And Run, “I recreated myself, and so can you.”

“It was like death by 1,000 paper cuts, it wasn’t one moment,” Arzon told Culture Trip. “It was a gradual two-year shift when I realized what I could get out of my running career could be more fulfilling. That was the driving force. I wanted to feel a certain way everyday — empowered and impassioned.”

Arzon has gladly converted the endless hours of paperwork and law jargon for sweat and sacrifice. Each week she teaches at least seven cycling classes at Peloton, runs 70-90 miles, does at least two strength-based classes, takes one yoga class and meditates daily.

She ran five marathons in five days (130 miles) in 2010 as part of the MS Run The US campaign to honor her mother who has multiple sclerosis. Arzon ran the Keys 100 — a 100-mile ultramarathon from Key Largo to Key West in Florida — in May.

“People are doing something for themselves, for charity, for whatever, and it just elevates the energy of the city and you get to see this beautiful varied landscape.”

After the NYC Marathon, Arzon, 35, will continue doing what she does best: motivating herself and others to “sweat with swagger” (as she says), and continue running marathons and ultramarathons. Running the more than 2,700 miles across the United States is on her bucket list of things to do. She also wants to develop an athletic apparel line, too.

It looks like Arzon won’t be slowing down anytime soon.

“We don’t have to live in the boxes people check for us,” she said. “It’s like living in the center of a Venn diagram. We have so many aspects of our lives that create who we are, but it’s up to you to create your own definitions. … There’s always time.”